Fabrication, In vitro and In vivo Characterization of Solid Dispersion- Microsphere Controlled Release System for Lornoxicam


Background: Lornoxicam is widely used for its anti-inflammatory, analgesic and antipyretic properties. However, it suffers from the limitations of possessing a relatively short elimination half-life ranging from 3 to 5 h, thereby; leading to repeated dosing which in turn may cause local irritation and ulceration. In addition, LXM also exhibits pH-dependent solubility. Effective management of inflammation in diseases such as arthritis requires the formulation of delivery systems that may be able to provide immediate release of drug for instant relief which shall be maintained for a prolonged period.

Objective: The present research work was aimed to modify the release pattern of poorly water-soluble drug Lornoxicam by designing a biphasic tablet comprising of solid dispersion (immediate release form) and microspheres (controlled release form) for the effective management of inflammation.

Methods: The solid dispersion (SD) was prepared by melting method using PEG 4000 and tween 80 and formation was confirmed by Differential Scanning Calorimetry (DSC) and Powder X-ray Diffraction (PXRD) studies. Polymeric microspheres loaded with Lornoxicam were prepared by ‘Emulsion Solvent-Evaporation’ method using Eudragit S-100 and Eudragit L-100. Microspheres (MS) were evaluated for drug entrapment efficiency, drug loading, drug content, particle size and in vitro release behaviour. Optimized microspheres (polymer concentration 0.5% w/v and drug concentration 0.1% w/v and solid dispersion (drug: PEG 4000: 4:6) were compressed in the ratio of 1:3 to produce biphasic tablet. The prepared tablets were evaluated for various pre-compression and post-compression parameters. Anti-inflammatory activity of the F4, M6 and the combination of SD and Microspheres in a ratio of 1:3 was carried out by Carrageenan induced paw edema method in Wistar rats.

Results: The solid dispersions prepared by melting technique showed an enhanced dissolution rate as compared to the pure drug. LXM microspheres exhibited a sustained drug release. In vitro release of lornoxicam from biphasic tablets showed that 20% of the drug released at the end of first one hour, followed by 33% release at the end of 4th h and maximum release of 94.1% at the end of 10 h. The prolonged effect continued till the end of 12 h. Results showed that the mixture of MS + SD exhibited 48% inhibition in 30 min which is increased to 88.63% at the end of 4 h which can be explained by initial burst release from the soluble layer of SD (which gave initial required effective concentration of Lornoxicam) followed by sustained release from matrix of microspheres (which maintained required level of Lornoxicam in blood).

Conclusion: A successful modification of the release pattern of LXM was achieved by designing a biphasic tablet comprising of solid dispersion for the effective management of inflammation. 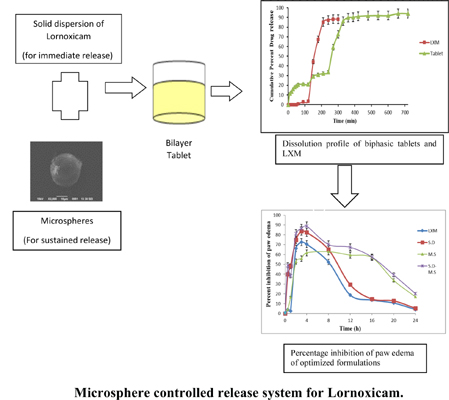