Aim: In the present investigation, silica nanoparticles (MSNs) stacked with hydroxyurea were combined and optimized for dependent and independent variables.

Methods: In this study, microporous silica nanoparticles stacked with neoplastic medication were prepared through emulsification followed by the solvent evaporation method. Prepared MSNs were optimized for dependent and independent variables. Different formulations were prepared with varying ratios of polymer, lipid and surfactant which affect drug release and kinetics of drug release pattern. The obtained MSNs were identified by FTIR, SEM, drug entrapment, in-vitro drug release, drug release kinetics study, and stability testing in order to investigate the nanoparticle characteristics.

Conclusion: From the stability studies data, it can be concluded that formulations are most stable when stored at a lower temperature or in a refrigerator, i.e. 5°C ± 3°C. It can be concluded that MSNs loaded with hydroxyurea is a promising approach towards the management of cancer due to sustained release and few side effects. 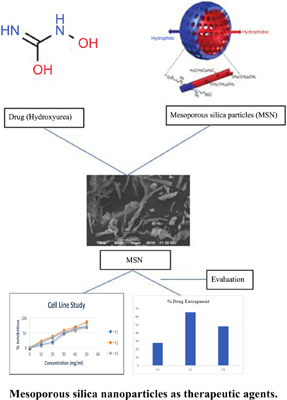