Objective: The objective of the paper was to propose a new technique which effectively minimizes leakage power in nanoscale power-gated circuits with minimal delay, noise and area requirement so that it can well be implemented in high-speed low-power digital integrated circuits.

Methods: A new power-gating structure has been proposed in this paper. The new proposed technique includes three parallel NMOS transistors with variable widths which are functional during the active mode to reduce the on-time delay. A PMOS footer with gate-bias is also connected in parallel with the NMOS footer transistors. The proposed technique has been verified through simulation in 45nm MTCMOS technology to implement a 32 bit adder circuit.

Conclusion: The proposed technique offers significant reduction in leakage power, reactivation noise and reactivation energy. The technique reduces the leakage power effectively at room temperature as well as at higher temperatures. Since the delay and area overhead of the proposed structure is minimal, hence it can be easily implemented in high-speed low-power digital circuits. 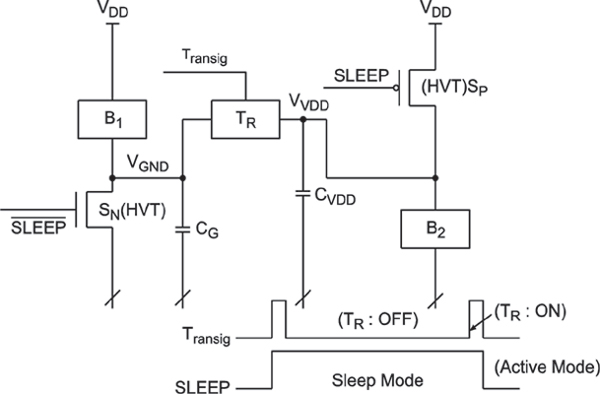