Background: The spectral response of Multiple Quantum Barrier (MQB) nano-scale avalanche photodiodes (APDs) based on Si~3C-SiC material system shows considerable responsivity of the device within a very wide wavelength range which includes some portion of Ultra- Violet (UV) spectrum (200- 90 nm), visible spectrum (390-770 nm), near-infrared (700-1400 nm), short-wavelength infrared (1400-3000 nm) and mid-infrared (3000-4000 nm) wavelengths. It has already been concluded from preceding studies that Si~3C-SiC MQB APDs shows better spectral response and excess noise characteristics as compared to equivalent conventional APDs based on Si. Moreover, the superiority of the illumination through p+-side (ITPS) structure has been observed among two probable optical illumination configurations such as illumination through n+- side (ITNS) and illumination through p+-side (ITPS) structures.

Methods: In this paper, the time and frequency responses of Si~3C-SiC MQB APDs have been investigated. A very narrow rectangular pulse of pulse-width of 0.4 ps has been used as the input optical pulse having 850 nm wavelength incident on the p+-side of the MQB APD structures (i.e. ITPS is considered here) and corresponding current responses have been calculated by using a rigorous simulation method developed by the authors; finally the frequency responses of the devices are obtained via the Fourier transform of the corresponding pulse current responses in time domain.

Results: The width of the current responses are limited to 4.7 and 3.1 ps in Si nano-APD and Si~3C-SiC MQB (consisting of five quantum barriers) nano-APD respectively for the input optical pulse of width 0.4 ps of 850 nm wavelength. On the other hand, the 3 dB upper cut-off frequencies of the above-mentioned diodes are obtained to be 68.63 and 82.64 GHz respectively. 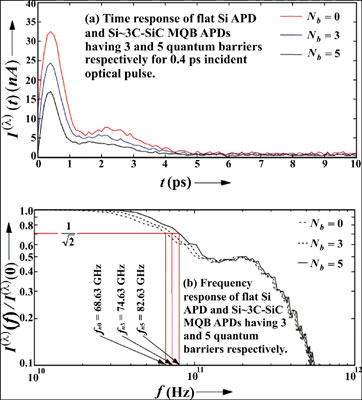