Background: A nano-tubular structure of Titanium dioxide (TiO2) was obtained using an electrochemical process based on the anodization of titanium foil in an organic electrolyte prepared with ethylene glycol (HOCH2CH2OH) containing Ammonium fluorides (NH4F) and ultrapure water under different anodization voltage. The morphological characteristics showed the formation of TiO2 nanotubes with different geometrical parameters. The electronic properties of the TiO2 NTs films were measured by the Mott-Schottky (MS) plots, indicating a positive slope for all graphs implying the n-type semiconductor nature of the TiO2 nanotubes (TiO2 NTs). The donor density (Nd) and the flat band potential (Efb) increases slightly with increase the anodization voltage.

Methods: Prior the anodization, the titanium (Ti) foils were cut into square shape (2.25 cm2) with a selected work area of 0.6 cm2. The samples were subjected to a final polishing using a rotating felt pad (01 µm) impregnated with alumina until a metallic mirror surface was obtained. The Ti foils were degreased by sonication in acetone, methanol and 2-Propanol for 10 minutes respectively, rinsed with ultrapure water and dried in a stream of compressed air. To form a TiO2 NTs, electrochemical anodization process was carried out at room temperature in Ethylene Glycol (EG) solution containing 0.3 wt% Ammonium fluorides (NH4F) and 2wt % ultrapure water for three (03) hours at different anodization voltage (20, 40 and 60V). A two-electrode cell was used for all the anodization measurements, with a platinum plate as the counter electrode, separated from the working electrode (titanium foil) by 1.5 cm. Immediately after anodization, the samples were soaked in ultrapure water to remove residual electrolyte for 10 minutes and then dried in an oven at 50 °C for 10 minutes.

Results: TiO2 NTs grown from anodization of Ti foil in fluoride EG solution for 3h by varying the anodization voltage. The micrographic analysis shows a strong influence of the anodizing voltage on the morphology and geometrical parameters of the TiO2 NTs. Non homogenous NTs morphology was observed at 20 V with the presence of corrugations along the walls of the tubes. A perfect and regular nanotublar structure with smooth’s walls tubes was obtained at an anodization voltage of 60V. Moreover, the increase of anodization voltage leads to an increase in both the diameter and the length of tubes. In fact, the inner diameter and the length of the tubes (Di and L) values increase with increasing potential, being around (39 nm and 2 µm) respectively at 20 V and (106 nm and 16,1 µm) at 60 V. The measured electronic properties of TiO2 NTs indicating the n type semiconducting nature. It is remarkable that the donor density Nd increases toward higher values by increasing the anodizing voltage until 40V. However, for an anodization at 60V, the Nd has a small decrease value (7, 03 * 1019 cm-3) indicating a diminution of defects present in the material. Also, by increasing the anodizing voltage, Efb takes increasingly more positive values. In fact, the Efb values are – 0.12, 0.05 and 0.15 V for films prepared at 20, 40 and 60 V respectively. Therefore, this behavior can be attributed to a displacement of the Fermi level toward the conduction band edge which leads to a larger band bending at the interface.

Conclusion: By varying the anodization voltage, titanium dioxide nanotubes (TiO2 NTs) were grown using electrochemical anodization of titanium foil in fluoride ethylene glycol solution for 3 hours. The morphology of the TiO2 NTs obtained was considerably affected; the anodizing potential determines the migration of ions in electrolyte during anodization process and simultaneously the tube diameter. An average small a nanotube diameter around 39 nm was obtained for 20V corresponding to 106 nm average diameter for TiO2 NTs structure synthesized at 60V. Furthermore, the semiconductor properties of the TiO2 NTs films have also been modified with increased values while increasing the anodization voltage. This behavior was attributed that the TiO2 NTs structure is more disordered, having much more defects provide abundant local donor energy levels which increases conductivity and decrease the probability of recombination of electrons and holes in these films, that can be integrated as active layer in the solar cells, in particular the Gratzel cells. 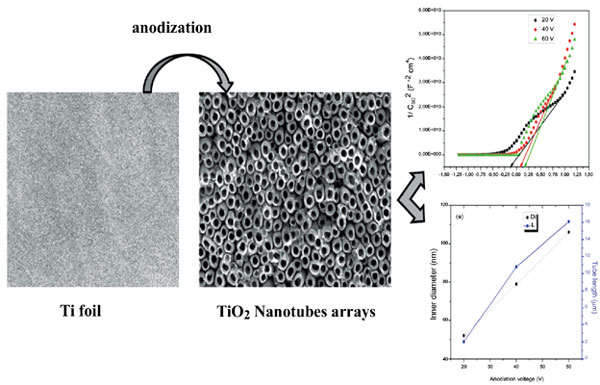